With the euro zone on the brink again, neither childish squabbles nor historical arguments are helpful to Germany or Greece

THE level of debate between Germany and Greece, protagonists in a drama that could make or break the euro zone, could hardly be called edifying. Take, for example, the YouTube video from 2013 which shows Yanis Varoufakis, then a left-leaning economics professor, arguing that Greece should simply default on its debts and “stick the finger to Germany”, and making an appropriate hand gesture for emphasis. When Mr Varoufakis, now Greece’s finance minister, was confronted with the clip on March 15th during a talk show on German television, he claimed the footage was doctored. The ensuing “Fingergate” lasted days, as the German media proved that the video was genuine, albeit taken out of context. Germany’s pundits spluttered with rage: the Greeks were mendacious as well as impertinent.

This week marked a nadir in relations between Greece and its largest creditor. The tone has been deteriorating ever since January when Alexis Tsipras, leader of the far-left Syriza party, took over as Greek prime minister. It is clear that Wolfgang Schäuble, Germany’s finance minister, and Mr Varoufakis no longer trust each other as partners in negotiations to extend Greece’s bail-out. When Mr Schäuble called his counterpart “foolishly naive”, Greece’s ambassador in Berlin filed a diplomatic protest.

Greece’s defence minister has threatened to let masses of Syrian refugees, possibly including terrorists, pass through to Germany. Europe has only itself to blame if that happens, he said. The Greek justice minister suggested that, as part of his country’s ongoing claims against its old oppressor, he might even seize the Athens property of the Goethe Institute, Germany’s cultural agency.

Arguments over a tactless hand gesture might be called a childish spat. But historically based threats to seize German assets carry a heavier payload because they recall some dark spectres that have never ceased to haunt both countries. Between 1941 and 1944 the Nazis occupied Greece with a brutality exceeded only in Slavic countries. Greece has never formally dropped claims on Germany which date from that time. Now, in the midst of a debate about recently incurred Greek debts, the government in Athens suddenly wants Germany to settle some much older obligations, both financial and moral, as well.

Germans don’t like being reminded of the past by others, because they have their own very formal rituals of recollection. Remembering and drawing lessons from the past is baked into the German approach to politics, psychologically and even physically. When legislators walk to debates in Berlin’s Reichstag building, they see walls covered in Cyrillic graffiti. These were scribbled by Red Army soldiers after they stormed to victory in 1945, and meticulously preserved as silent exhortations to responsible governance. Germany’s politicians generally go out of their way to be sensitive to countries which the Nazis invaded or occupied.

Had it not been for Russia’s aggression in Ukraine, Angela Merkel, the German chancellor, would now be preparing to attend the 70th-anniversary celebrations of the Soviet Union’s victory over Germany on May 9th. As it is, she will instead go to Moscow the following day, May 10th, to visit the grave of an unknown soldier. Meanwhile, the need for unequivocal contrition over the Holocaust is the main reason why Mrs Merkel still calls her country Israel’s strongest ally in Europe.

But for all Germany’s impressive atonement and sensitivity, there are limits. This becomes clear when one looks in detail at the cluster of historical issues that have been raised by Greece, and how they have been handled. The Greek demands can be broken into three categories. First, there are general reparations which Germany was expected to pay to the governments of countries that were the victims of its aggression. Second, there are moral or legal debts Germany may owe to individual victims. And third, there is the specific matter of a loan that Greece was forced to extend to Germany during the occupation; it was used to finance the war in Africa.

At a big London conference in 1953, Germany’s creditor countries, including Greece, forgave much of West Germany’s foreign debt, thus helping to make possible its “economic miracle”. But reparations were deferred to a future peace treaty. That treaty was, in effect, signed in 1990, when the two Germanies and the four victors (America, Britain, France and the Soviet Union) accepted reunification. Helmut Kohl, the chancellor, and Hans-Dietrich Genscher, the foreign minister, deliberately avoided calling this “2+4 agreement” a peace accord. This helped deflect suggestions that the matter of reparations should have been dealt with explicitly at the same time. But it was widely assumed that the issue had simply expired.

Greece did not speak up at the time. But it later argued that a treaty to which it was not a signatory could not have wiped out its claims. As Greeks sometimes put it, they were told before 1990 that it was too early to deal with the issue of reparations. Then they were told it was too late. This month Mr Tsipras declared in parliament that Germany had used “tricks” to get out of reparations. This view was firmly rejected in Berlin. Germany considers this case “closed, legally and politically”, as Mrs Merkel’s spokesman repeated this week.

Germany takes a similar view about its possible debts to individual victims and their families. West Germany made many payments of atonement in the post-war years, totalling €71 billion ($75 billion), according to government data. As part of a 1960 agreement with west European countries, it paid DM115m (or €57.5m) to Greek victims of Nazi crimes, which amounts to €2.50 “for each day at Auschwitz,” says Eberhard Rondholz, a historian. To victims and their descendants that seems laughable. Starting in 1997 victims of one German massacre, in the village of Distomo in 1944, sued Germany privately.

In 2012, however, the International Court of Justice in The Hague sided with Germany, invoking the notion that governments have immunity from lawsuits by individuals in foreign courts. Germany was not the only country relieved by that decision; the world is full of governments that have done wrong to foreigners in the past.

The forced loan by Greece to Germany in 1942 is different. It amounted to 476m Reichsmarks or, according to Greek estimates, €11 billion today. (That is about 17% of the €65 billion that Greece today owes Germany as part of its bail-out.) In the 1960s Ludwig Erhard, the then chancellor, said that Germany would repay the loan once it reunified. He may have assumed this would never happen.

There are many in Germany who are open to repaying the forced loan. “When if not now?” asks Mr Rondholz. To avoid setting precedents Germany could put the money into a trust or foundation, he adds. Several politicians from the centre-left Social Democrats and Greens are also calling for repayment, in keeping with Germany’s post-war tradition of assuming responsibility and showing goodwill.

Other Germans see the timing of renewed Greek impatience to talk about the war as suspicious. Since roughly 2000, German identity has shifted, says Hans Kundnani, author of a new book, “The Paradox of German Power”. Germans no longer see themselves only as perpetrators but also as victims of the war, as heirs not only of Auschwitz but also of Dresden, a city incinerated by British bombs. 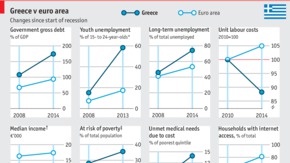 Greece in graphics: the facts and figures explained

In today’s narrative, reasonable or not, the Germans see themselves as victims in the euro crisis. They think they are being asked to pay for the errors of others, who are using the past as a “pretext for extortion, a way to get German money”, Mr Kundnani thinks. Indeed Bild, the largest German tabloid, has described the talk of reparations as “blackmail”.

This worsening climate inevitably affects the tone of debate about the future of the euro zone. According to a new poll, 82% of Germans doubt that Greece will carry through the reforms it has promised, and 52% want it to exit from the single currency. In a sign of her concern, Mrs Merkel has invited Mr Tsipras to Berlin on March 23rd. It will take all her vaunted skill to save Europe from an unintended disaster.